As an Amazon Associate I earn from qualifying purchases.

Who else hates dealing with raw chicken?  I know when I am cutting up a whole chicken or chicken parts, I want it done as quick as possible.

One thing that can’t be denied is that buying a whole chicken is ofter cheaper than buying it pre cut.  Whether you are butterflying it or cutting it into pieces, a good pair of kitchen shears are must.

There are a couple of main things to think about when you’re seeking out the best poultry shears.  Read on to find out what you need to look for.

Here are some of my favorite kitchen shears/poultry shears:

When it comes for picking the best kitchen shears for cutting chicken, there are a couple of things to think about:

Now, let’s take a closer look at each of these shears.

If you’re looking for the ultimate ease in cutting a chicken apart, then consider these spring loaded kitchen shears for cutting chicken and other meats.

The spring loaded mechanism means that you won’t need to exert much force to even cut through chicken bones, which can be a plus if cutting chicken is something you do quite often.

As a bonus, these spring loaded shears also separate for easy cleaning. 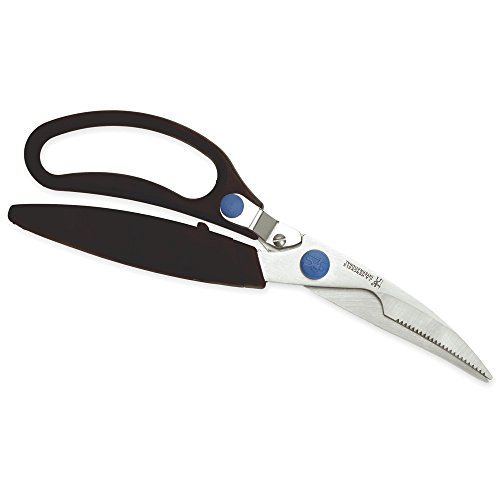 This is a great poultry shear that has a unique feature, the blades lock for storage.

This is important to think about, depending on how you plan on storing your kitchen shears for cutting chicken.

I store mine in a knife block, but many of my other kitchen tools go into the drawers.

I try to keep them organized, but you all know how that goes.  If you’re also going to be storing them in a drawer with other kitchen items and accessories, the locking blades are a plus for when you go rummaging through it.

These stainless steel Henkel blades are nice and sharp for cutting through chicken and other meats. 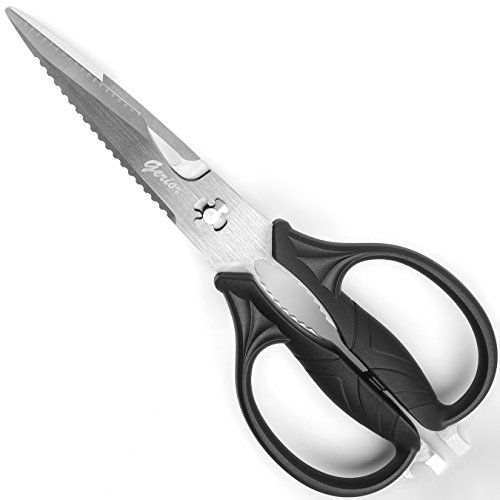 These Kitchen Shears Come-Apart by Gerior are awesome because they come apart!  This makes them super easy to clean by hand or in the dishwasher.

If you haven’t heard of Gerior before, they are a very well known German brand with a great reputation that focuses on shears and knives.

The shears also take on a more traditional scissor form factor, versus the form factor of some of the others on the list, you use these just as you would a normal pair of scissors. 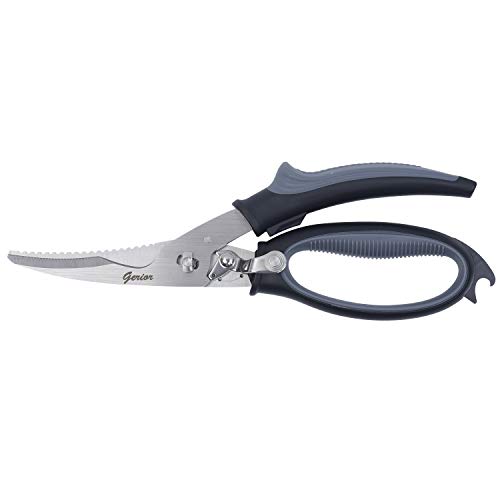 If you aren’t the strongest person (like me), these spring loaded kitchen shears make cutting chicken a breeze – even cutting out the backbone to butterfly it!

Also by Gerior, these spring loaded kitchen shears come with a lifetime warranty.

Like their counterpart, these spring loaded kitchen shears for cutting chicken come apart to clean, which is important for sanitary reasons. 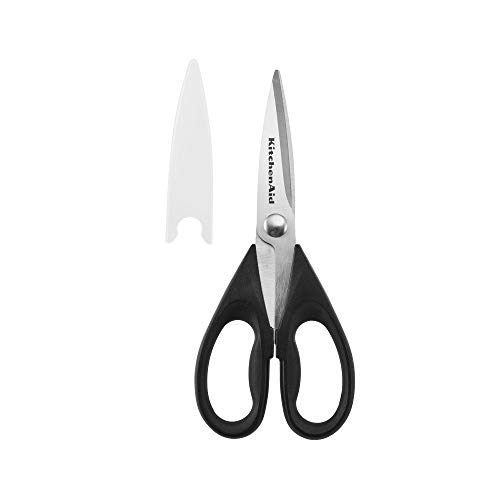 These KitchenAid KC351OHGSA Multi-Purpose Scissors just can’t be beat, and they are great for everything, even cutting chicken.

They do take a bit more force to get through the back bone of a chicken than some of the other options here, but they are a great general purpose shear if you are willing to put in a bit more effort for cutting chicken.

They come in array of colors, and can be put in the dishwasher.  I have had my pair for years at this point.

The only downside is over time, the plastic handles tend to get nicked, but they still work fine.

There are quite a few things to think about when picking the shears for cutting poultry.

Let’s take a closer look at these poultry shears one more time:

Both of these options are spring loaded, for the ultimate ease of use.  This is especially important if you don’t have a good grip.

If you are looking for a more traditional form factor, and want to use them like you would a pair of scissors, then the Gerior Come Apart Kitchen Shears are a great option and come apart for easy cleaning.

If you want to be able to lock the blades when not in use for easy storage, then the J.A. Henckels International Henckels Poultry Shears are a great option.

Finally, if you aren’t worried about all these extra features, the KitchenAid KC351OHOBA Shears are a great general purpose kitchen shear and can cut mostly anything with a bit of extra effort.

What is the difference between kitchen shears and scissors?

You may be wondering why you can’t cut poultry with the scissors you have on hand.  While kitchen shears and scissors are similar, there are also some key differences between the two.

First of all, what you may think is a pair of scissors may actually be shears!  Shears have a smaller hole for your thumb, and a bigger hole for your fingers to help you get more leverage to cut better.

Scissors have two holes that are the same size, which may not be a bad thing since it doesn’t matter as much how you hold them.

The next big difference is size.  Shears are generally 6″ or more long, to give you the ultimate cutting power.  Smaller than that, and they are scissors which won’t cut through things in your kitchen as well as a pair of shears.

Can you cut chicken with scissors?

It is very hard to cut a chicken with scissors.  Remember, scissors have smaller blades and equal size holes, which make it hard to get the leverage needed to cut through the bones in the chicken.  The holes and length of the blade are what make the chicken easy to cut with a pair of shears.

For something like cutting a chicken you definitely should consider kitchen shears, or a large knife and a cutting board, abandoning the scissor idea entirely.

What are four uses for kitchen shears?

Still not sold on buying a pair of kitchen shears?  They are great for more than just cutting poultry.  Here are four more things you can do with kitchen shears besides cut chicken:

The possibilities are really endless if you have the best kitchen shears, and you’ll figure out even more ways to use them!

How to Cut a Chicken

Do you need some help learning how to cut chicken?  Sure, you can try to figure it out on your own, but there are great tricks out there

Here are some great videos on YouTube on how to cut chicken.

If I want to cut a chicken in half, I like to just cut the back bone completely out on both sides.

Whenever you are handling raw food, it is important to make sure you are following proper food safety protocols.  Especially with chicken.

Be sure to check out some food safety tips for cutting chicken from the National Poultry Council.

Here are some of the things I do when handling chicken:

Do you have any other tips for handling raw chicken?  Be sure to leave them in the comments!

This site rocks with Focus.